Tannehill with the players on that team which even made the cover of Time Magazine in a photo of them at The Great Wall. (He’s second from left in the back row on the cover).

‘Back in the 1970s I went to school with John Tannehill. Who is John Tannehill?   Well his 15 minutes of fame occurred in the early 70s when, as one of the best Ping Pong Players in America, he went to China in 1971 as a member of a ping-pong Team that played the Chinese. It signified the beginning of a thaw in the relationship between China and America that pretty much culminated in Nixon’s trip to China.

When I met Tannehill I knew nothing about the China trip. For me he was just someone I knew, occasionally spoke to and noticed that he wanted awfully hard to be hip. Hip he wasn’t. Cool he was as he was definitely one of the most rank individuals I ever met. As my wife and I had our own house by my senior year in college, we had him over the house several times and, if I remember correctly, he may have sleep over a night or two. My first wife had one rule about this. John was required to take a shower. When I knew him, the man never bathed. As I wrote, he marched to his own beat.

When I did find out about the China business I was duly impressed and, of course, he went way up on my “I am impressed scale.” So, I had a ton of questions for him and learned some things about the trip. Tannehill, the best player on the team was the only American Player who actually beat some of the Chinese who, as he told me, were serious players who played ping pong (in my words) as if it was war and losing was not part of their vocabulary. He was surprised, though, that he and the others had gotten all that attention and even more surprised when the team made the cover of Time although there was a lot of press around them all the time. There was more he had to say about the trip but I forgot.

What I did remember was asking him how really good he was at Ping Pong. He gave me this assured smile and took me down to one of the game rooms in the student union which contained the ping pong tables and asked one of the guys there—an engineer type—if he wanted to play.

A little background first. The college I attended had/has one of the best engineering schools in the country. In fact, Neil Armstrong (first man on the moon) even taught there. Therefore the school was flooded with engineering students who basically all looked alike. Unlike me and Tannehill who lived on or near the campus, they were commuter students and wore the same uniform; white shirts, plastic pen holders in their shirt pockets and eye classes with a wrap-around holding strap that prevented the eyeglasses from slipping. The minute you saw these guys (who are now probably running America) you knew who they were and we in the ‘creative’ departments had a nickname for them—“gears.” (Talk about arrogant.   I am embarrassed to write the above as one of my step-sons is an engineer and I was damn proud when he earned that degree.)

So, back to the story. Tannehill picked out one of these engineers and before starting to play turned to me and said “watch.”

The ‘gear” he was playing was a kid who had determination written all over his face. He obviously considered himself a good player and so Tannehill played a bit of easy ping pong to determine how good a player his opponent was. That out of the way Tannehill put on a show to demonstrate his skills that reminded me of the Harlem Globe Trotters.   He had complete control of that ball at all times.   First he did a series of opening moves that the gear came no place near hitting. Then he played with the ball bringing it closer and closer to the net until there was no way the kid could bounce it over. Then he did distance playing. He hit the ball in such a way that the opponent had to hit it hard so Tannehill had to move further and further from the table to hit it. I think Tannehill was a good 10 feet away from the table bouncing the ball to his opponent.

Finally, as a sort of ‘coup de gra,’ Tannehill jumped on the table and played the guy while standing on that table; completely controlling the ball, never missing a single shot while the ‘gear’ struggled to keep up. Tannehill could have easily beaten him but he played in such a way that he gave the kid shots he could hit so that the game would continue.

By this time everyone in that game room had gathered around and were thoroughly enjoying the show. Finally, Tannehill turned around and began playing by bending down and looking through his legs. I think he was a little bored so, to get the kid to give up, he beat the kid in shot after shot. I still don’t know how that kid had the guts to keep playing as I would have already run for the hills.

So tossing the paddle on the table Tannehill turned to me.

“I never saw anything like that in my life. It was fantastic. You owned that table.”

He then told me about the gear who, refusing to give up, Tannehill had humiliated.

“They may have laughed at him. But he didn’t give a shit. He wouldn’t give up. You put that determination together with a great talent, add years of practice and you will have a champion.”

“Did he have any talent?”

“None what so ever, that’s why he is playing in the game room.”

In person, I found John Tannehill one of the sweetest gentlest souls (my wife thought he was like a little puppy dog) but playing ping pong he was a ruthless player who gave no mercy and who’s respect had to be earned the hard way— by playing at the top of your game just like he was. In short it was the first time I had ever met a world class champion and it was an education that I never forgot. 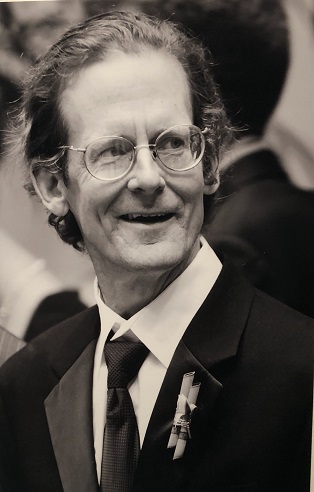 U.S. Table Tennis Hall of Famer and former U.S. No. 2 – John Vernon Tannehill – passed away peacefully at his home on Thursday, July 2, 2020 after a nearly year-long battle with cancer.

John grew up in Middleport, Ohio – a small town along the Ohio River – but even before John was a teenager, his father Chet, a publisher/editor of a newspaper for the Gallipolis/Pomeroy communities, started bringing John to Columbus to play table-tennis.

As a teenager, table-tennis took John around the world. He was the No. 1 player on the famous “Ping-Pong Diplomacy” trip to China in 1971 (depicted in the 1994 movie Forrest Gump). At the time, no official American delegation had visited China in over 20 years. The trip not only helped thaw the relationship between China and the U.S., but it paved the way for President Nixon to visit China the next year. It also landed John and his teammates on the cover of Time magazine. In 2011, John returned to China to commemorate the 40-year anniversary of the trip, where he said he was treated like a rock star, signing hundreds of autographs each day.

And despite all of John’s achievements in table-tennis, his greatest personal victory in sport was winning the Columbus City Chess Championship in 1979. As a self-taught player, he entered the tournament and won, upsetting a chess master along the way.

After largely retiring from professional table-tennis, John worked full-time for AMVETS for more than 20 years. John will be remembered for his gentle soul, eccentric way of life, and all that he accomplished as a world-class table-tennis champion. John was unique: teaching us all it is okay to be different, and he was a friend and coach to many.

John’s funeral will be held on Tuesday, July 7, 2020 at 12pm at Riverview Cemetery in Middleport where friends and family will lay him to rest with his father, Chet Lawrence Tannehill.

John and his family are so grateful for the care he received from Ohio Living Hospice of Greater Columbus and the many messages of friendship, admiration, and support from the Columbus table tennis community where he played, taught, and mentored for nearly 60 years.

Posted in Other Writings